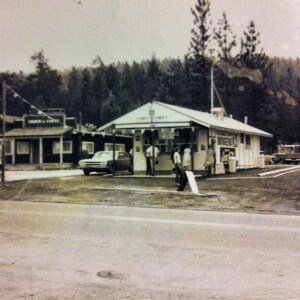 My mom texted me this photo last night and I immediately asked to get a print so I could hang in my office.

I want to tell this story in person to everybody who visits me.

This is my grandfather’s first business on grand opening in July 1967. It was a drive-thru restaurant in Big Bear, California, and burgers were 24 cents.

He would later also start a fence company, construction company and ultimately a motorcycle dealership (which he still works at to this day and where I worked for several summers). He’s a masterful network (a people person), a shrewd real estate investor (although he’d never call himself that), and one heck of a role model for me.

I remember the first time I told him I wanted to own a business. He encouraged me to get a job with a pension instead.

I still don’t think he realizes the impact and influence his life and work had (and continues to have) on me, as an entrepreneur, as a grandfather, and as my friend.

But needless to say in 2008 when I had the opportunity to start iThemes, I fulfilled a lifelong dream and accomplished something I’m very proud of: I followed in my Papa Leo’s footsteps.

10 replies on “Footsteps of Entrepreneurship”

Really nice article and picture. Thanks for sharing!!
Keep up the good, hard work!

I enjoy all of your writings.

Thank you for allowing “us” readers to get to know you better through your posts.

Your Grandfather must be very proud of you and your accomplishments.

Keep up the great work.

Cory, Leo is a good person to look up to. You have done a good job with your business. Keep u the hard work. You know Leo has worked hard to get where he is.

I remember this place. I actually had a burger there around 1969-we spent a week in Big Bear City one summer.

P.S. It was nice meeting you in person however fleetingly!

Ditto, Emil, sorry we didn’t get to talk more.

There is a special joy that will never be known but by those risk takers who create immense value for others.

Thank you for following in his steps and being an example for me and many others.

Woot – thanks my friend!

Nice post. We need more stories about how hard work pays off.