One of the most neglected yet essentials of leadership is self-care and support.

This Wednesday, I’ll be sharing my experiences managing the ups and downs and share keys for how I take (better) care of myself now.

By the way …. one of the critical keys of support I’ll share live on the webinar has been my peer group (who I’ve walked with for 8+ years now). The exponential impact to my success and happiness of that one group inspired Jeff and I to offer our new Leader Huddles.

You’ll also want to signup for my partner Jeff’s webinar on strategic business cadence on May 23 at 11 a.m. Central.

Jeff has been facilitating strategic progress meetings for clients for years. I’ve had the opportunity to sit in on some recently and he’s got a real gift for asking the critical questions that need to be asked in order to move the agenda forward. He’ll be sharing takeaways and tips for making the most of your key meetings that drive progress.

We’ll be rolling out more webinars like these in the coming weeks at Leader.Team!

After months of preparation and planning, I’m excited today to rollout Leader.Team officially with my co-founder Jeff Meziere.

Our vision is simple:

to build a community of dynamic leaders, who want to learn and grow, together.

When I first became a leader of a team over 10+ years ago, I remember how scared I was and inadequate I felt. Being a leader and manager was often a daunting task, without much support, and as my team grew so did those feelings as well as the pressure and responsibility.

What I yearned for most as a leader and came to rely on later was having a set of trusted peers that I could share perspectives and experiences with to learn and grow, and get feedback and support on the challenges and struggles we all face on the never-ending road of leadership.

A few years into my first role as a leader, I found all of that and more in a peer group based in Oklahoma City, where I live.

Being a part of that peer group changed my life for the better. (One of the members of that group, by the way, was my co-founder, Jeff.)

I can point back to that group as a catalyst for my growth and success as a leader. It’s been so impactful on my life that I helped start two other in-person groups.

And today …. we want to offer a similar experience for you.

We’re rolling out Leader Huddles … which are facilitated online peer groups of 4-8 leaders, meeting once a month for 90 minutes to learn and grow, and support and encourage each other.

Our first Leader Huddles are forming this month!

Go check out the details on our Leader Huddles and sign up today!

And if you have questions, please hit our contact form or schedule a discovery call with us. 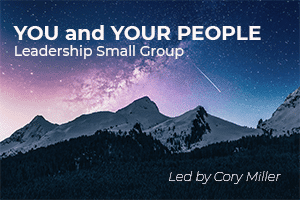 For the last couple of months, I’ve been searching deeply, tirelessly, exhaustingly, for what’s next. And frankly, I’m just too damn impatient to wait any longer.

I’ve been asking myself over and over and over: What drives me? What key themes emerge when I reflect on my strengths and experiences, and feedback from others I trust?

Oh yeah, and what would people actually value enough to pay me for?

My coach and I talked this week about the next chapter — and in regards to the time, energy and focus question what do I put in my bucket or jar.

I always go back to people, and specifically helping leaders and their teams.

For the longest time my personal mantra has been to: Inspire others to their greatness.

As a leader and entrepreneur my mantra has been to: Make people’s lives awesome.

A couple months ago I said to myself that I wanted to make an exponential impact.

So I have gone around and around on what I might offer. I’ve read, sought feedback, tweaked ideas and drafted plans endlessly.

Then last night, my wife Lindsey who has had a front row seat to all this endless exhausting soul-searching wandering and ranting (bless her heart!) said, essentially … why don’t you just put it out there … and talk about what you want to talk about.

I want to talk about: You and Your People.

I want to talk about the leader and their team. And share and discuss my personal experiences, growth, key lessons over the last 10+ years as a leader of teams — and what’s been the most impactful and helpful for me on the subject of leading myself and leading others.

It’s going to be somewhat of a first draft. But also updating concepts I’ve shared in the past that have resonated within me, and also others.

You have the opportunity to be a part of my beta group.

Here are the topics I am most passionate about … specifically, how I did it and how I continue to succeed:

YOUR PEOPLE — The Team You Lead

with a no-questions-asked (well maybe one: what could I do better?) money-back guarantee

Have more questions? Post them in the comments below, or ping me privately here.

One of the best pieces of advice (experience share, OK, OK) I got as a rookie entrepreneur trying to build our team was:

“If you want to see how good your team is and the health of your business, take two weeks off with minimal, if any, contact and see how they do.”

I’ve done it that now several times now over the last couple of years and have been so impressed with our team and their ability to do what we need to do, without me standing over them.

Too often I see entrepreneurs, particularly those with high levels of skills (particularly with tech), struggling with control and delegation. They simply can’t let go of certain things.

And I often struggle with delegation myself.

You know you’re struggling with delegation when you say:

“But it’s just easier, faster, better for me to do it.”

The key question is: “Should I do it for them, or should I let them do it and figure it out on their own?”

Sadly, what happens when we don’t choose to delegate, and them simply do it ourselves, is a whole host of negative things.

Sure, you might get YOUR ideal quality and result when you do it yourself every time … but you also become the bottleneck when you don’t train and delegate to others on your team. And you’re certainly not leveraging your team’s strengths and skills wisely.

Additionally, I know a lot of entrepreneurs who struggle with constant burnout and frustration (that often leads to anger and bitterness — been there, done that) because of this core challenge.

To make the scenario even simpler …. this recently hit home with me as a parent.

We have two young children. As infants, we had to do every thing for them for obvious reasons. But now as they are becoming toddlers, we’re realizing that they can become more autonomous in many ways and we definitely want to encourage them to do so.

I mean, I can’t imagine having a teenager who can’t go to the bathroom by themselves, or fix themselves a drink or a snack, but rather have us scramble to their every whim or need.

In fact, the goal isn’t that we don’t love and care for them … it’s that eventually when they are older and adults and go into the world, we want them to be fully functioning, healthy, happy and autonomous adults. (Even if we follow them around the world because we miss them.)

Back to business though ….

Delegation is probably one of the toughest things I do. It takes continual refinement, practice and communication.

It means letting go and empowering others to do their best.

But I think there are numerous benefits to Letting Others Figure It Out Versus Doing It For Them.

Here is a graphic to illustrate what you typically get with each of those options: 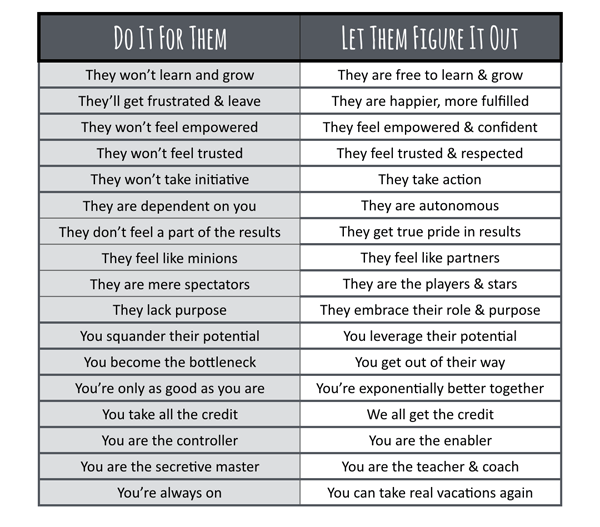 As Dan Pink said in his bestseller “Drive,” it’s all about offering your team, your people, “Autonomy, Mastery and Purpose.”

Here are naunces, caveats, keys to empowering others:

OK, now I need to get back to work on improving my delegating and empowering.

Wanna be a good leader and manager?

I have found the ONE sustaining, redeeming, enduring thing you have to do.

But it’s remarkably simple so you’re likely to dismiss it.

You could screw most of the other stuff up, but if you simply care about people they’ll follow you to the ends of the earth.

Caring is about empathy — being able to “understand and share the feelings of another.”

Caring is about showing kindness, compassion and concern for other people involved in or affected by your business.

Caring is other-centered … it means being genuinely interested in THEIR stories, not your own.

And yes, it gets messy sometimes because when you care people open up their lives to you. But that’s because they trust you with that information, again, all because they know you care.

Here are some simple ways you can show you care:

By the way, caring breeds loyalty.

Awesome, amazing loyalty for your customers and your team … all because you simply, most genuinely, CARE about them.

Caring also brings you more in alignment with what your customers want. When you care about them, you empathize with and for them, uniquely understanding who they are and what they want and need. Your stories will be more aligned and your products and services will cater more to them because, yes, you care.